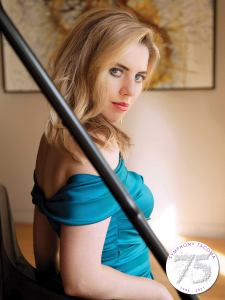 Symphony Tacoma will close out its 75th Anniversary Classics Series on May 14 with a collection of works that feature an array of classical styles. The concert will open with Samuel Coleridge-Taylor’s The Bamboula, a “rhapsodic dance for orchestra.” The son of a Creole man from Sierra Leone and a white English woman, Coleridge-Taylor explored his own Creole and African heritage and endeavored to create a romantic Nationalism rooted in Black music. “The Bamboula” is both a drum and a dance brought to the Americas and the Caribbean by African slaves as early as the 1750s. The dance made its way to the southern United States with the expansion of the slave trade and was made famous in New Orleans in the 19th century. Composed in 1911, Coleridge-Taylor’s The Bamboula is characterized by the composer’s distinctive pentatonic melody, syncopated rhythm and bluesy harmony.

Symphony No. 5 has always been one of Jean Sibelius’s most admired works, revealing his style in strong, positive colors. Originally written in 1915, he revised it in 1916 and again in 1919. His own harshest critic, Sibelius struggled to give voice to the composition and noted in his diary, “It is as if God Almighty had thrown down pieces of a mosaic for heaven’s floor and asked me to find out what was the original pattern.” Author Hugh Macdonald describes the symphony’s wide range and variety of music: “There are rootless murmurings in the strings, fragmented calls in the winds, seemingly random entries of the timpani, and a great solidity in the brass transformed in the finale into a glorious hymn to the Nordic gods.”

On April 21, 1915, Sibelius experienced an event that would prove a monumental inspiration for the symphony: “Today at ten to eleven I saw 16 swans. One of my greatest experiences. Lord God, that beauty!” The opening of the finale captures this rustle of wings with tremolo strings accompanying an expansive melody. Sibelius juxtaposed this breathless music with a majestic “swan theme” sounded first by the horns. As the symphony concludes, the swan theme grows into an exultant shout of triumph, perhaps a reflection of Sibelius’ mood.

Following intermission, guest soloist Natasha Paremski will join the orchestra to perform Rachmaninoff’s Piano Concerto No. 2. No stranger to the Rachmaninoff repertoire, Paremski’s prowess was described by the Chicago Tribune as “by turns pensive and tempestuous, warmly songful and brazenly fast.” With her consistently striking and dynamic performances, Paremski wins over audiences with her musical sensibility and flawless technique.

In 1900, Sergei Rachmaninoff suffered a professional and emotional low. His First Symphony had premiered to dismal reviews three years earlier, triggering a paralyzing depression. In desperation, Rachmaninoff sought help from a hypnotist, Dr. Nicolai Dahl, who would instill encouraging thoughts into his subconscious. With Dahl’s support, Rachmaninoff was able to complete the concerto which became an instant success.

Dubbed “one of the greatest works in the piano repertoire,” this concerto is extraordinarily complex and has captivated audiences for over a century. It is also one of the most popular and recognizable concertos in the classical repertoire with themes that would be reborn throughout the 20th century as the melodies of several popular songs, including Frank Sinatra’s 1945 “Full Moon and Empty Arms” and Eric Carmen’s 1975 “All by Myself.”