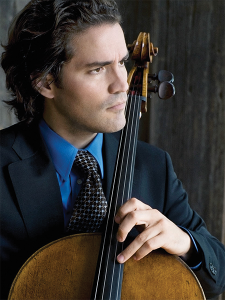 We are excited to welcome internationally-renowned cellist Zuill Bailey to the Pantages stage for our November concert! Widely considered one of the premier cellists today, Mr. Bailey performs on the “rosette” 1693 Gofriller cello, formerly owned by Mischa Schneider of the Budapest String Quartet. His rare combination of celebrated artistry, technical wizardry and engaging personality has secured his place as one of the most sought-after and active cellists today.

Mr. Bailey will perform Dvořák’s powerful Cello Concerto, sometimes called the “king of cello concertos.” One of the most musically demanding of all cello concerti, it is admired for the richness of its orchestral music as well as the lyrical writing for the solo cello. The soulful second movement reflects Dvořák’s mourning of the death of (and his unrequited love for) Josefina, his former piano pupil and his wife’s sister. Dvořák offers a final farewell to Josefina in the coda, which he described as “a gradual diminuendo, like a breath.”

Also on the program is Louise Farrenc’s Overture No. 1, which has been said to contain “the fire of Beethoven.” One of the finest composers of the 19th century, Farrenc’s symphonies and overtures caught the attention of Berlioz, who admired her orchestrations, and Schumann, who admired her piano music. She broke barriers for women musicians, first by being accepted into the previously all-male composition class at the Paris Conservatory, and later as a professor of piano. Although her overtures were performed in major concert halls around Europe during her lifetime, they went unpublished. It was only in the 20th century, with the revival of interest in women composers, that her work finally entered the repertoire.

Contemporary composer Jessie Montgomery interweaves classical music with elements of vernacular music, improvisation, poetry and social consciousness. In Caught by the Wind, she evokes images of movement. She describes the piece as being “about cycles—whether bicycles, life cycles, or wind cycles—it spins, journeys and winds, gets caught and ultimately comes to its end.”

In 1827, Hector Berlioz attended a performance of Shakespeare’s Romeo and Juliet starring Harriet Smithson, the actress who became his first wife and creative muse. The event had a visceral effect on him: “…to witness the drama of that passion swift as thought, burning as lava, radiantly pure as an angel’s glance… it was as though an iron hand had gripped me by the heart—I knew that I was lost.”­

In Roméo et Juliette, Berlioz’s symphonie dramatique for chorus, soloists and orchestra, the composer declares his consuming passion for Smithson. The “Love Scene,” which will be performed at the concert, is a purely instrumental representation of the play’s famous balcony scene. With conversing instrumental voices, the music feels like an opera without words.