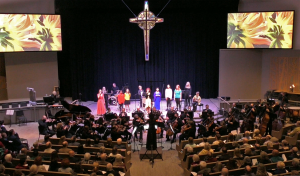 Two years after our world plunged into a pandemic, times are still dark. Violence, sickness, suffering, death.  The same could be said for late 1791, when Mozart was writing his ”Requiem.” Europe was at war, and the composer himself became deathly ill. Yet in deep darkness, light shines brighter – and so the pairing by Symphony Tacoma of that iconic, soul-baring “Requiem” with a joyful composition by Tacoma children made for a powerful season ending on June 4.

The evening – and the light – began with “Eternal Light”, a piece in several parts commissioned by the orchestra from Tacoma’s youth. From a virtual video stitched together in the height of the pandemic from submissions of instrumental melodies, voices and artwork, “Eternal Light” transformed this year into something deeper and more complex as the youth who took part could come together in person to share, experience art like the immersive Van Gogh exhibit and learn from director Sarah Ioannides, whose brainchild and production this is.

The result, performed live after a screening of the 2020 video, got a standing ovation from the sold-out house. Diminutive but highly capable pianists Ben Cifka Herrera and Leland Mills led their compositions, sharing the piano bench, followed by a suite of compositions and improvisations on violin, clarinet, ukulele, tuned bells and the haunting, ethereal hand pan. On overhead screens, youth artwork brought the musical imaginations to visual life: animated butterflies floating into indigo moons and scuttling scorpions. All young performers played beautifully, some with quite complex or profound harmonies, including Ioannides’ own three children. All ended in the upbeat ‘70s-style “Sunflower”, a song of golden hope and joy. As a model for youth music education and involvement, it’s hugely inspirational. The challenge for next year: To reach out to youth who clearly don’t have the same home/school/church musical advantages, and make the same difference in their lives.

The contrast with the “Requiem” couldn’t have been stronger. From the inexorable opening funeral trudge through the solid fugue of the Kyrie, the orchestra and Symphony Tacoma Voices set a tone of full, dark sound, flowing and churning like a river through the roundness of University Place Presbyterian Church. Not an ideal layout for musical coordination, the space also manages to be both muddily boomy and also completely without reverberation. Ioannides kept everyone together with a masterful authority, with only occasional messiness, while the orchestra valiantly kept beneath the soloists seated, by necessity, behind them.

Those soloists, though, were a sheer delight. Baritone Barry Johnson delivered a “Tuba Mirum” full of rich majesty and gravitas, later balancing tenor Brendan Tuohy’s more Puccini-esque passion. Soprano Allison Pohl soared over the tumult with a powerful golden tone, if a bit overblown. But the breathtaking moments came with mezzo Laurel Semerdjiian, whose gutsy, lower register added urgency to every word.

Dealing with masks and wide spacing, Symphony Tacoma Voices sang magnificently. Following Ioannides’ lead they offered clear diction and dramatic shading, with basses moving fiercely through their sixteenth-notes and sopranos angelic in the stratosphere. Supported by a punchy bassoon/bass/timpani section and violins weeping in perfect unison, this was a “Requiem” that didn’t shy away from darkness – which made the final light, the lux aeterna, even more cathartic.

Just as in 1791, and with every death and sorrow since, this is music we deeply, truly need to share with each other.