Pianist Pallavi Mahidhara joins Symphony Tacoma and its chorus to offer both a world premiere and a sparkling tribute to the beauty and fragility of our Earth. 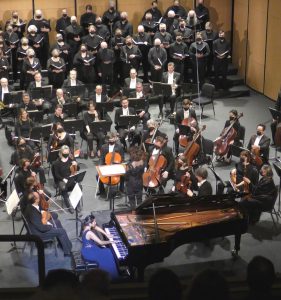 Even after six months of in-person concerts, it still feels like a gift to come together with a live audience, symphony orchestra and 72-voice choir. So when that orchestra and chorus, plus a polished piano soloist, offer a musical message on something that affects us all, you listen.

That message, at Symphony Tacoma’s Classics IV concert at the Pantages Theater Saturday night, was about nature: its shining beauty, and how we have the power to destroy it or save it.

And the message’s composers, not coincidentally, were both called Ludwig.

The night began with Pallavi Mahidhara sailing her way through Ludwig van Beethoven’s Piano Concerto No. 4 like a stately galleon over a calm ocean. It’s a rare beast in that it begins with solo piano: quiet, meditative chords that usher in the repeated-note theme with wistful hesitation. From that moment Mahidhara, a young soloist also known for fusing and defying musical genres, showed how she meant to go on: in complete control. Through light-handed runs, unbearable pianissimos and big chordal gestures, Mahidhara’s Beethoven was restrained rather than fiery, sad rather than moody. Helming the orchestra, Sarah Ioannides, also known for superb control, echoed Mahidhara’s tone in each interjection. The result was muted (especially in the Pantages’ muffled acoustics) but reflective, setting the mood for contemplation.

And so, when composer David Serkin Ludwig took the stage to talk about a dying forest, the audience was ready to listen. World-premiered at this concert, “The Bleeding Pines” is a 15-minute story about what happens when humans nearly destroy a forest, and the power of one person to save it. It’s based on a poem by North Carolina poet Ray Owen, who tells how 90 million acres of an ancient longleaf pine forest was hacked and cut for sap to make turpentine, dwindling to just 3,000 acres before being saved in the early 1900s by conservationist Helen Boyd Dull.

Symphony Tacoma Voices called out the forest’s story with passion, confidence and clarity, despite their masks. As Ludwig painted each section of the poem with timbres and harmonies, the chorus took on the voices of wind (hazy alto and soprano), forest (a lone, sweet alto), cut and scarred tree trunks (rough basses with sliding glissandi), fire (an entire a cappella section, layered on haunting open fifths like shape-note singing) and even God (cathedral chords and an ethereal soprano solo).

Underneath, Ludwig played with harmonic dissonance (anguished augmented fourths, eerie major/minor thirds, sustained semitone clusters) to convey the forest’s pain and fragility. Fire – needed for these trees to regenerate – became rain, with slapping pizzicati, and an army of percussion (clapper, snare, xylophone) became the cuts and slices of bleeding resin. Ludwig also paid homage to his more famous namesake, opening his piece with a tenor/bassoon recitative echoing that of the Ninth Symphony, and ominous timpani triplets later echoing the knocking of Fate in the Fifth. Altogether, “The Bleeding Pines” is a powerful, painterly piece, starkly conveying both the destruction and the hope of salvation that humans hold over nature, and themselves.

Finally, as if resolving that polarity, the concert ended with a triumphant performance of Beethoven’s “Choral Fantasy.” Mahidhara returned to the piano in a sparkling midnight-blue dress replacing the previous pristine white, and offered the icing on Beethoven’s sumptuous musical cake. The deceptively simple six-note melody wound through wind solos, duets, strings and finally a golden-toned chorus, declaring the shining beauty and divinity of nature while Mahidhara’s piano rolled with glittering octave runs and the Pantages filled with a sense of hope.

A final encore – Mahidhara accompanying Symphony Tacoma Voices in the sonorous harmonies of the Ukrainian national anthem, with everyone standing in honor – seemed to confirm that hope against the precariousness of our current world.