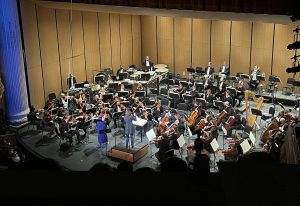 It was a thrill to attend a live concert and hear Symphony Tacoma on Saturday, February 26, 2022, in Tacoma’s historic Pantages Theater. In the few times I have attended live events in the last six months, there is an energy and longing in attendees to be a part of a shared experience. Symphony Tacoma fills this need in our community.

Saturday’s program, “Classical Influences from Bohemia” featured well known works by Smetana and Mahler, and also the contemporary Concerto for Violin and Orchestra by David Ludwig. The common theme for the selections was in their Eastern European cultural influences—with melodies, rhythms and stories from that rich area of the world.

The opening work in the performance was Smetana’s The Moldau (from Ma Vlast), a beloved, popular concert piece. This programmatic music follows the journey of the Czech Republic’s Moldau River from its beginnings as melting snow in the mountains, past hunters in the forest, alongside a village with a wedding, into the night accompanying water nymphs, through violent rapids, and finally beside the majestic city of Prague. In the opening, twinkling flute sounds describe small mountain creeks, and eventually these fingers of water combine with added instrumental textures and establish the main theme of the Moldau River.

Smetana’s Moldau is a fantastic story in sound, and Symphony Tacoma held the full attention of the listeners. The woodwind section was nimble and impressive with its cohesive musicianship. Conductor Sarah Ioannides craftily led the orchestra through the river’s journey and navigated tricky transitions with grace. Throughout the work the orchestra laced detailed running passages across the different instrument sections in a unified musical message. The string sections were especially intimate in the water nymph section when their ethereal muted tone colors were a hushed contrast to the broad Moldau theme. In the final decrescendo, the main theme slowly disappeared into silence, but suddenly was followed by the punch of hefty final resonant chords. This music was magical.

The most engaging piece of the night was David Ludwig’s Concerto for Violin and Orchestra. The concerto was composed for his spouse, Bella Hristova who was also the evening’s soloist. This composition strikes a personal note for Ludwig, not just that the married couple collaborated in the performance, but that the music documents some of Ludwig’s feelings, values and emotions around marriage. Dr. Ludwig gave some guiding comments before the performance, mentioning that the concerto is about “two souls coming together.” The concerto was a virtuosic violin solo, and was filled with emotions of sincerity, love and celebration.

Ms. Hristova was a stunning violin soloist. Her artistic flair and blistering technique created a sense of awe. Hristova had command of her instrument (and of this music) and engaged the audience from the first phrase. Sprinting fast passages, lyric slow phrases, dancing rhythms and resonant chords, this concerto showcased Hristova’s technical skill and captivating phrasing.

In the first movement of Ludwig’s concerto, full tutti passages would melt into thinner textures highlighting the solo violin. The ending of this movement was dramatic, with a loud crash followed by a single tone thread from a solo horn.

The second movement was at times noble and also cinematic in sonorities. It had broad timbres juxtaposed with more intimate solo statements. There were also some creative instrumental techniques where certain strings slide fingers across while bowing, and a chorus of seagull-like calls emerged from the orchestra. The beautiful slow second movement sounded at times influenced by Samuel Barber’s Violin Concerto and Bernstein’s West Side Story.

The final concerto movement was a Krivo Horo (Crooked Dance) intending to depict the “way people walk home after a great party.” Inspired by Eastern European dance, this finale included angular rhythms, lively call-and-response between the soloist and orchestra, and some absolutely brilliant use of the percussion section. This finale was a raucous party and festive conclusion to an incredible piece. Congratulations to Dr. Ludwig, Ms. Hristova, Maestra Ioannides and all the Symphony Tacoma musicians for sharing this wonderful concerto performance with our community

The final work of the concert was Mahler’s Symphony No. 1 in D Major. Nicknamed “The Titan,” this massive work has complex and juxtaposed emotions, exposed solos, sudden transitions and epic proportions. It was an absolute thrill to experience Mahler’s music in performance. The sheer mass of sound and humongous architecture is consuming and overwhelming.

Symphony Tacoma musicians stepped up to Mahler’s music with precision and confidence. In movement one, distant offstage trumpet fanfares synchronized wonderfully with the orchestra. The slow third movement included polished solo performances by Chris Burns (principal bass), John Ruze (principal bassoon), and Paul Evans (principal tuba). The final movement shifted from loss and longing to triumph and celebration. Ioannides’ pacing of phrase and tempo made the symphony come alive. The audience burst out in a standing ovation as the final chord rang into the theater.

Thank you, Symphony Tacoma, for a memorable concert and performance.