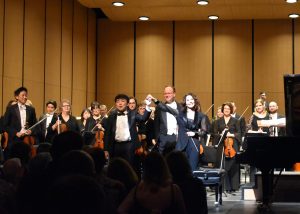 Saturday’s performance by George Li and Symphony Tacoma was one of the most special and memorable music events in our local arts history. Live music offers an amazing opportunity for people to connect. Sometimes across time and cultures the performing arts provide shared experiences that change us. Top to bottom – this Symphony Tacoma concert was exciting, polished, poetic, and touching.

Pianist George Li was absolutely stunning in his performance of Rachmaninoff’s Piano Concerto No. 3. The 24 year-old pianist had command of the keyboard, and showed a complete array of musical expression possibilities. Muscular and grandiose louds contrasted intimate soft dynamics. Simple lines contrasted cascades of chromatic harmonies. It was magical and hypnotic to watch and hear Li perform. His cadenza in the first movement was spectacular. There was a moment where he seemed to play at least three musical ideas simultaneously; each independent line had its own expression, balance, and nuance. His power in fortissimo sections seemed to be unbelievably strong, with a punch and heft that sailed over the orchestra. One challenge is that Rachmaninov composed so many notes, so many dense textures, and many moving parts. Li was able to go far beyond managing the technical demands. He owned this performance. The expression, clear characters in sound, and an intense drama blew everyone in attendance away. Li is truly a shooting star, and we were in awe. I am told that musicians’ jaws dropped at rehearsal, when they found out that this would be both Li and Ioannides’ first public performance of the Rachmaninov. Bringing a musician of Li’s caliber to our community is what changes us, and inspires Tacoma to more fantastic artistry.

Under conductor Sarah Ioannides’ leadership, Symphony Tacoma complimented Li’s artistry with polish and inspiration. The admiration between the orchestra and soloist was visible – players smiling and looking at Li throughout the concerto. It was a treat to see the veil of professional stoicism lift, and to witness Ioannides, Li, and the orchestral musicians’ electric vibe that fueled their performance. This performance had the personal communication of chamber music through the large orchestra medium. The commitment to musical teamwork was most obvious in the magical woodwinds and horn solos, and the extreme soft passages with strings. Ioannides has cultivated a special ensemble for our community.

At the conclusion of the Rachmaninoff, the audience exploded into an energetic standing ovation. It did not take any convincing for Li to play an encore, Gluck’s “Dance of the Blessed Spirits,” from the opera Orfeo and Euridice. It was spellbinding. After the bombastic and dense concerto, this was a lovely and sentimental contrast. Li played the mournful piece with simple clarity, and it was perfection. Everyone was on the edge of their seats. I was amazed as Li’s hands looked like liquid as the closing falling chords melted across our ears.

The concert opened with a minor mishap (or so I thought), in that Ioannides was ready to start David Ludwig’s Fanfare for Samuel Barber, but the orchestra had forgotten to tune! Concertmaster, Svend Rønning stood and the oboe gave the tuning A for the ensemble. The tuning A subtly became the first note of the fanfare, and the simple unison pitch actually blossomed into the exciting and intense composition. The A was a part of the piece! Full of angular rhythms and reaching melodies, the audience was escorted through different creative treatments of Barber’s ideas. A particular section of the fanfare used brilliant percussion accompanied by siren whistles in the woodwinds and horns. A handful of times the driving cacophony is silenced by a single searing note, played by principal trumpet Charles Butler. He was an amazing standout – with soaring and powerful high altitude playing. His brilliant tone was a pillar on which the orchestra clung.

Ludwig’s clever composition is dedicated to Samuel Barber, and uses material from his famous Adagio for Strings. Ludwig will be Symphony Tacoma’s composer in residence this year. He and his music will be featured throughout the season. On a personal note, Ludwig and Ioannides are connected through their education at the prestigious Curtis Institute of Music, where Samuel Barber was also a composition teacher.

The first half of the concert ended with Brahms’ Symphony No. 3. This standard work is a favorite in orchestral repertoire. Symphony Tacoma played the piece with polish and commitment. Ioannides paid obvious attention to details in articulation, especially in the playful third movement. She also helped draw out a rich blend and balance from the ensemble, with elegant exchanges of phrase between instrument sections. As the energy wound down in the final section of the fourth movement, it was obvious that we had experienced a new level of ensemble playing from the Symphony Tacoma.