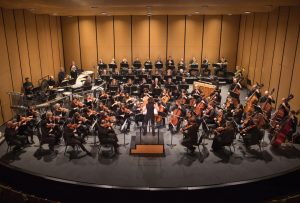 Some people give you a rose on the first date. But for their first concert of the season on Saturday night, Symphony Tacoma immersed a delighted audience in a complete sensory bouquet: a lush Victorian theater, a handsome young soloist, and three swooningly romantic pieces – including one composed in honor of a perfume.

Leading us straight into the dizzying center was “Rose Absolute” by Karen Tanaka, a talented Japanese composer best known for her film and TV scores like the BBC’s “Planet Earth II”. Inspired by a French perfume of the same name (and written as a gift for Tanaka’s lover), “Rose Absolute” unfolded slow, rich harmonies like petals. Shining string solos glistened over rippling piano and harp, and splashes of Chinese bells added a tangy edge to the sweetness.

Then came Erich Korngold’s popular violin concerto in D major, played to within an inch of its 1940s filmstar glamour by soloist Blake Pouliot. A young Canadian violinist who combines the self-assurance and big hair of Justin Bieber with the rockstar bow attack and sliding portamenti of Nigel Kennedy, Pouliot swayed through the Korngold with as much virtuosity as stage presence. Swinging between flirtatious glances at director Sarah Ioannides on his left and concertmaster Svend Ronning on his right, Pouliot made good use of a full-body volume technique that brought out his bright, thinnish tone to the maximum while pointed at the audience, and blended in with the orchestra when turned back.

No doubt about it, though – Pouliot has mastered the art of poetic phrasing, caressing each moment of the sweeping first movement and the lyrical second as if for the very first time. Light and agile as a bird on the upper runs and arpeggios, he brought out the character of this film-score-style piece, turning the second movement Romance into a shy lovers’ meeting in a silent movie. He raced away in the third movement, flying through bow ricochets and left-hand pizzicato, with the orchestra galloping alongside – sheer fun, if not perfectly in sync. Playing his own sweetly simple arrangement of “The Last Rose of Summer” was a nice touch for the encore.

And then, with Rachmaninoff’s “Symphonic Dances,” the orchestra came into its own. Seldom heard, this piece is just one example of some thoughtful and creative programming by Ioannides during the coming season, which also includes works by Black and female composers, a couple of premieres and a tango-inspired finale.

On Saturday night, the orchestra gave us a taste of what that creativity could sound like. From the dark shadows and fierce percussion of the first movement’s strident march, through the eerie haunted-ballroom waltz of the second movement, complete with slithery clarinets and dancing strings; to the skittering 6/8 of the finale, full of chattering xylophone and strident brass pounding out the “Dies Irae” funeral chant, this was a bouquet of roses in purple and black.

While each section had some shining moments – lusciously smooth saxophone, lilting bassoon, dark clouds of cello and bass – the best part was the rubati in the waltz. Following Ioannides’ masterful architecture and intense coaxing, every musician played the expressive hesitations as as a single mind, like a ballroom of perfectly whirling spirits.

A true musical bouquet, received enthusiastically (even the Pantages ghost seemed to put in an appearance, flickering balcony lights at the spookiest moment.)

Symphony Tacoma continues its season with “Caught in Love” on Nov. 19 at the Pantages. Details and tickets at symphonytacoma.org.