Symphony Tacoma and enthusiastic audience partner for the first concert together in-person since Covid-19. 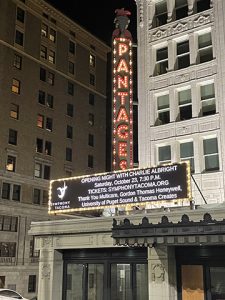 Classical music reviews don’t often include the audience as an integral part of the performance. But everyone in the almost-full Pantages concert by Symphony Tacoma Saturday night – their first in-person since the Covid-19 pandemic began – realized this crucial point: If music brings our community together, then the audience is just as vital a part as the performers.

And while the technical aspects weren’t always the smoothest on either side, the evening’s musical journey was as emotionally powerful and musically symbolic as anyone could have hoped for, with a program that soared across a diversity of race, gender, experience and emotion.

First up – after an emotional rendition of “The Star-Spangled Banner,” with conductor Sarah Ioannides encouraging rusty audience singing – was “Color Express”, the first movement of the first symphony by Patrice Rushen. A four-time Grammy winner, Rushen’s known for pretty much every kind of musical success: jazz, pop, R&B and classical. She’s a singer-songwriter who’s also a TV music producer and director, concert pianist and composer. Her aptly-named “Color Express” charges through the orchestra, pulling apart its color timbres in a language that’s like Bernstein in a hip New York jazz bar. The ascending syncopated theme rises through dancing violins, solo woodwind and laidback brass, with a futuristic fusion that’s always sophisticated, never trite.

Hopefully we’ll hear Rushen’s full symphony at some point. Right now, it’s one of several works by women or composers of color occupying that five-to-ten-minute spot on the top of the program, and while the Symphony is understandably programming well-known classics to recoup both its audience and finances, going beyond this nod to diversity is a crucial next step to really represent and include the whole community.

Headlining Saturday’s program was Charlie Albright, a Centralia-born piano virtuoso who brought his sparkling technique to Shostakovich’s frenzied Piano Concerto no. 2 in F major. Albright approached the work with thoughtful phrasing and his signature fluid articulation, transforming the melancholy Andante into molten gold. But behind Shostakovich’s dancing mockery of Communist-era self-aggrandizement is the harsh reality of the suffering it caused, and that ferocity was missing, with the chords of the final Allegro lacking in volume and attack.

Albright’s whirlwind encore of “Great Balls of Fire” (his own arrangement?) was exactly what the audience needed, however, reminding us all of the sheer joy of headlong virtuosity.

Finally came Tchaikovsky’s Symphony no. 6, the “Pathétique.” It may be an orchestral warhorse, but as the welcome-back after 18 months of collective upheaval, separation and grief it was the perfect vehicle to express what everyone was feeling, musicians and audience alike. Through the opening’s deep, funereal bass/bassoon chords to the famous, tear-filled violin theme; from the nostalgic 5/4 waltz of the second movement to the triumphant “Superman” march of the third and back to the darkness, Symphony Tacoma brought its live audience on the journey we’d all just traversed over the past year and a half.

Ioannides remained superbly in control, pulling occasional (and understandable) orchestral messiness into her precise, tight gestures, insisting on wider and wider dynamic arcs and gracefully reminding the audience that those moments between movements – without applause – are the hushed expressions of a thousand people all feeling the same thing, being together in the deepest of ways inside music written by a man who also suffered greatly, and who died of a contagious disease nine days after this work premiered.

Symphony Tacoma promises to be Tacoma’s symphony, bringing our community together through music. The rest of its 2021-22 season echoes that promise, featuring composers and soloists from the region and the world, female and male, from a diversity of races, from the LGBTQ community and across the centuries to finish with an expression of light and hope beyond death (Mozart’s “Requiem” and the youth-composed “Eternal Light”).
It’s good to be back together in music.