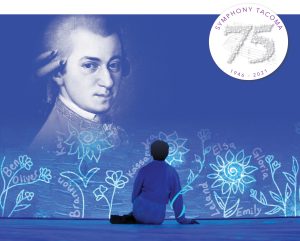 Symphony Tacoma will present the final performance of its 75th Anniversary Season with the premiere of Eternal Light 2.0, the second production in the Symphony’s innovative community youth project, followed by a performance of Mozart’s Requiem, his final work. The finale concert will take place on Saturday, June 4 at 7:30 pm at University Place Presbyterian Church.

Eternal Light is a multi-arts community youth project that originated during the Covid-19 pandemic. Like many orchestras, Symphony Tacoma turned to online programming as a vehicle to deliver music during the lockdown. “I wanted to provide a unique piece for our community that would lift spirits and celebrate the fusion of art, music and language,” said Music Director Sarah Ioannides, who conceived and produced the program.

Inspired by Lux Aeterna, an uplifting movement in Mozart’s Requiem, the Symphony put out a call for local students to submit original music, lyrics, drawings and poetry that reflected their interpretation of “eternal light” or whatever inspired them during difficult times. With the help of a professional film production team the first Eternal Light production was released on the Symphony Tacoma YouTube channel in February 2021.

For the 2022 project, the Symphony received 14 music compositions and nearly 40 artworks from area youth ages 8 to 18. Ioannides worked with co-producer Kim Scharnberg to orchestrate the works and Fernanda Films to weave the artworks into an audio and visual “music gallery” that will be synchronized to the music in the performance. Unlike 2021, six of this year’s young artists will actually be able to perform live with the Symphony’s professional musicians along with participants of University Place Presbyterian Church’s Alleluia Singers (Diana Greene, director).

In addition to the original visual art submissions, students from Curtis Junior High School art classes created drawings and paintings for the project. CJHS art teacher Shannon Brennan and Ioannides shared the new music with the students to help them visualize the sound and translate it into their artwork. The students also found inspiration from the Imagine Van Gogh multimedia exhibition at the Tacoma Armory during a private showing and photoshoot.

Eternal Light 2.0 comprises two parts. In the first, two young pianists, Ben Cifka Herrera and Leland Mills, will perform their pieces “A Spark in the Dark” and “Bluebird” with Symphony players. The second part highlights “Sunflower,” a song written by Keianna South and Karl Hartman, along with music by Ben Pellandini, Brannon Warn Johnston, Gloria Sung and a live improvisation by Elsa Hartman, among others. Digital versions of the visual art will be carefully synchronized to the music and projected on screens, offering the audience a true multi-sensory experience.

“Building on Symphony Tacoma’s aspiration to engage our community and share great music, we have entwined the students’ creations together into a single message of hope and happiness. The result is upbeat and modern, expressive and relatable!” says Ioannides.

For the second half of the concert, Symphony Tacoma and the Symphony Tacoma Voices chorus will perform Mozart’s final composition, Requiem. Allison Pohl, Laurel Semerdjian, Brendan Tuohy and Barry Johnson will lend their voices as featured soloists.

The unique circumstances surrounding the Requiem’s composition have cast a shroud of mystery over it that has persisted for centuries. A few weeks before his death in 1791, Mozart was said to have been approached by a ‘grey-clad stranger’ who represented an anonymous patron who wanted to commission a requiem mass for his recently deceased wife. Years later, this patron was identified as Count Franz von Wazlsegg-Stuppach, an amateur musician who wished to be regarded as a major composer and pass off this work as his own.

By the time he started work on the Requiem, Mozart was already terminally ill, and parts of the composition were written while he was on his deathbed. Following his death and fearing the commissioner would demand a refund for the incomplete composition, Mozart’s widow enlisted the help of Franz Süssmayr, a former pupil of Mozart’s, to finish it. Süssmayr was familiar with the piece, having discussed the instrumentation and played through the completed parts with Mozart several times.

Of the twelve movements, Mozart had only completed the opening Kyrie in its entirety. He had written the vocal parts and a figured bass line for most of the others, leaving just the orchestration for which he had clearly indicated his intentions. These movements are therefore widely regarded as essentially the work of the master. Süssmayr completed the Lacrymosa and the last three movements, as Mozart was unable to address them before his death.

Over the last 50 years, several composers and performers have sought to improve upon Süssmayr’s efforts. Regardless of its dubious origination, Mozart’s Requiem is considered one of the most beloved and emotionally stirring choral works of all time.

This concert is sponsored by Virginia Mason Franciscan Health, Pacific Northwest Eye Associates, One Stop Dentistry and Tacoma Creates. Tickets are $30 for general admission and $48 for reserved seating.