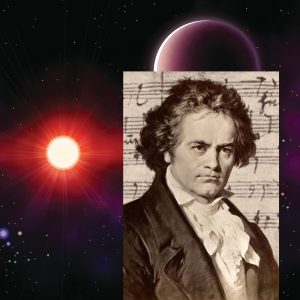 Symphony Tacoma is marking the 250th anniversary of Beethoven’s birth by performing three of his works in its first two concerts of 2020, beginning with his Symphony No. 3 “Eroica” on Saturday, February 22, 2020. The orchestra will perform Overture to The Creatures of Prometheus and Fantasy for Piano, Chorus & Orchestra “Choral Fantasy” at the March 21 concert.

Eroica, which means “heroic,” is one of Beethoven’s most celebrated and ambitious works. Originally, Beethoven had intended to dedicate this work to Napoleon, one of his personal heroes who he admired for his efforts to elevate the status of the working classes. However, when Napoleon declared himself emperor in 1804, Beethoven denounced the act, eventually publishing the work “to celebrate the memory of a great man.”

More substantial, dramatic and emotionally impactful than typical symphonies of its time, Eroica represents a shift from the Classical period to the Romantic era. Beethoven challenged listeners to go beyond the pleasant, light music of the status quo, elevating the symphony into a work of art in its own right. At the time of Eroica’s composition, Beethoven was just coming to grips with his hearing loss. His willingness to take risks and blaze a new path is evident in both his music and in the boldness with which he battled his deafness.

Also on the concert program are two U. S. premieres. The first, Spheres by new composer Simon Petersson, was conducted by Music Director Sarah Ioannides in Sweden in 2018. Narrative in nature, the work sparks the listener’s imagination to tell its story without visuals, with the title only providing a hint of its subject matter.

The second U.S. premiere is Yaron Gottfried’s Electric Guitar Concerto, a beautiful classical piece featuring a non-traditional orchestral instrument. Gottfried is one of Israel’s most prominent contemporary musicians who bridges classical, contemporary and jazz music. His Electric Guitar Concerto uses presets with various styles of sounds to change the atmosphere and character of the music, presenting the electric guitar as a unique solo instrument within the classical acoustic world.

The featured soloist for this piece is guitarist Michael Nicolella. With a repertoire spanning from J.S. Bach and Domenico Scarlatti to Jimi Hendrix and Elliott Carter, Nicolella is known for creative programming that blurs the lines between musical styles and disciplines. He is recognized as one of America’s most innovative classical guitar virtuosos and has extended the repertoire and audience of his instrument. A graduate of Yale University, Berklee College of Music and the Accademia Chigiana in Siena, Italy, Nicolella currently lives in Seattle and is a faculty member at Cornish College of the Arts.

Frederick Delius’ On Hearing the First Cuckoo in Spring will open the concert. In this symphonic poem, listeners can envision the start of a bright sunny day, with the charming exchange of a cuckoo’s call by a solo oboe with the lush sound of the violins and woodwinds in response.

Beethoven’s Eroica and His Electric Universe is sponsored by MultiCare, General Plastics, One Stop Dentistry and ArtsFund.