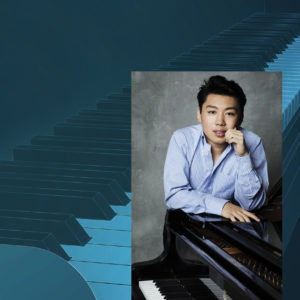 Symphony Tacoma and George Li will take on one of the most technically-challenging piano concertos in the standard classical repertoire in Rachmaninoff’s Third Concerto, Saturday, November 23, 2019 at 7:30 pm in Tacoma’s Pantages Theater. The program will begin with Fanfare for Sam, a tribute to composer Samuel Barber written by Composer in Residence David Ludwig, and Brahms’ poetic Symphony No. 3.

At 24, George Li is one of the most talented classical pianists of his generation. Music Director Sarah Ioannides has performed with Li many time, first collaborating with him onstage with the Simon Bolivar Youth Orchestra of Venezuela when he was just 12 years old. “I am very excited to bring George to Tacoma,” says Ioannides. “He is such an extraordinary musician—that was evident even when he was a tween! His gift for expression, his maturity, interpretation and technical ability are just astounding. The Rachmaninoff Third Piano Concerto with George will be an amazing and lasting experience for all.”

Rachmaninoff’s Third Concerto offers an immense challenge to stamina and endurance for the soloist, with minimal moments of respite. Uncommon for a concerto in the big Romantic tradition, Rachmaninoff saw the soloist as an alert, flexible, responsive musician who knows how to blend, accompany, and listen.

Also at the November concert, the orchestra will perform Fanfare for Sam by inaugural Composer in Residence David Serkin Ludwig. The grandson of pianist Rudolf Serkin and nephew of pianist Peter Serkin, Ludwig serves as chair of the composition faculty at the Curtis Institute of Music. He is a recipient of the prestigious Pew Center for Arts and Heritage Fellowship in the Arts and was named as one of the “Top 100 Composers Under Forty” in 2012. Additional works by Ludwig will be featured in the Symphony’s February and March programs, including a new commission entitled The Bleeding Pines.

According to Ludwig, “Fanfare for Sam is a tribute to that great American composer, Samuel Barber, a musical hero to me and to so many others that followed in his footsteps (literally) at the Curtis Institute as students. In thinking of Barber’s contribution to American music, I wanted the Fanfare to reflect a contemporary take on musical tradition; to mix the old with the new…[and] to feature each instrumental section of the orchestra as a celebration of all of its many colors and sounds.”

Completing the program is Brahms’ Symphony No. 3, the shortest of his four symphonies and perhaps his most personal. The top notes of the three opening chords are F – A flat – F. These three notes are the first letters of Brahms’ motto, in German, frei aber froh which translates to “free but happy.” A lifelong bachelor, Brahms had adopted the motto in response to the motto of his friend Joseph Joachim, frei aber einsam (free but lonely). Brahms used his three note motto in all four movements in different guises.

ABOUT THE GUEST ARTIST:

Praised by the Washington Post for combining “staggering technical prowess, a sense of command and depth of expression,” pianist George Li possesses an effortless grace, brilliant virtuosity and poised authority far beyond his years. He began playing piano at the age of four and made his first public performance at Boston’s Steinway Hall at the age of ten. Since winning the Silver Medal at the 2015 International Tchaikovsky Competition, Mr. Li has rapidly established a major international reputation and performs regularly with some of the world’s leading orchestras and conductors.

Mr. Li resides in Lexington, MA. He graduated from New England Conservatory Preparatory School, and later earned a dual degree program at Harvard University and the New England Conservatory in 2018. He was the recipient of the 2016 Avery Fisher Career Grant, a recipient of the 2012 Gilmore Young Artist Award, and the First Prize winner of the 2010 Young Concert Artists International Auditions.